Bernard Arnault, the owner of Dior and Louis Vuitton, was at the top of the list of the world’s richest businessmen for the first time, Forbes Real-Time ranking showed. The Frenchman’s fortune rose by $1.8 billion over the day, which allowed him to briefly oust Amazon CEO Jeff Bezos from the top

French billionaire Bernard Arnault on Monday became the world’s richest man for the first time in Forbes Real-Time ranking, which is updated in real time. As of 7:00 p.m. Moscow time, Arnault’s fortune was estimated at $109.6 billion, putting the businessman ahead of Amazon CEO Jeff Bezos ($109.5 billion). However, the Frenchman remained at the top of the list for only a few minutes, after which Bezos retook the top spot.

Arnault is the majority owner of LVMH, which unites several premium brands, including Louis Vuitton, Dior, Givenchy and Hennessy. Arnault’s fortune has grown by almost $34 billion since March, when the annual ranking of the richest businessmen in the world was published by Forbes. Then the Frenchman’s capital was estimated at $ 76 billion: this gave him the first place in wealth in Europe, but only the fourth in the world.

Arnault rose to second place in the Real-Time ranking for the first time in June, a week behind Microsoft co-founder Bill Gates. In November, the Frenchman was second again behind Bezos. The fortune of the Frenchman in recent weeks was growing largely thanks to the positive reporting of LVMH and the announcement of his purchase of the American jewelry company Tiffany & Co. The deal was the most significant one both in the LVMH portfolio and in the luxury goods segment as a whole.

Jeff Bezos, the founder of Amazon, ceased to be the richest man in the world for the second time this year. In October, he temporarily lost first place to Bill Gates, but just as quickly regained the leadership. 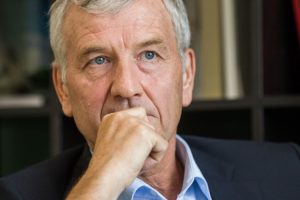 Next post The figure of the highest pinotage: how the billionaire Galitsky’s wine turned out
admin